Love in the Time of E​-​Mail 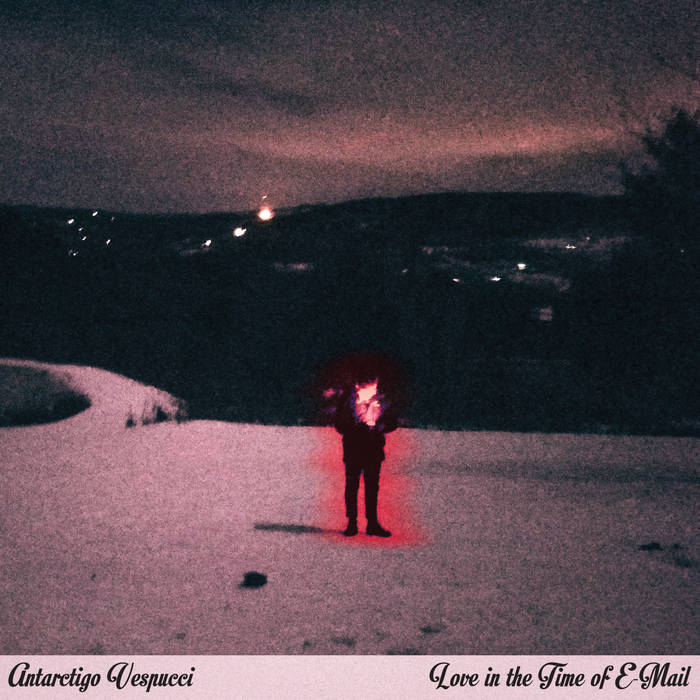 Mr_RedundantGuy Probably my favorite album of all time. Amazing, relatable songs along with awesome production makes this a must have. Chris Farren and Jeff Rosenstock just compliment each other so well. Seriously, go buy this right now. You won't regret it. Favorite track: Breathless on DVD.

Hank Scorpio Eagerly awaited. Dope as ever. Favorite track: Freakin' U Out.

aethernet THIS ALBUM FORREAL MAKES ME SOB DEEP INTO MY PILLOW AND ALSO THRASH AROUND MY LIVING ROOM THANKS FOR ROCKING ANTARCTIGO SEE YOU IN HELL Favorite track: So Vivid!.

In 2013, Chris Farren faced an uncomfortable certainty: his band was breaking up. For the last eight years, the one constant in his life had been Fake Problems, the indie punk group he had started as a teenager and successfully steered for almost a decade. In that time the scrappy group of Floridians had put out two albums on LA label SideOneDummy, toured all over the world, and even landed a few songs on TV. But now, that was all over. Not knowing what else to do, Chris went to New York.

The idea was to collaborate, to find writing partners, something the musician had never done before. After a few days in the city he ran into his friend Jeff at a party. At the time, Jeff was fronting the band Bomb the Music Industry!, a Brooklyn-based punk collective that Fake Problems had often crossed paths with on tour. The two decided to give writing together a try.

It was only the next day, as Chris was walking up the three flights of stairs to Jeff’s apartment, guitar in hand, that he realized the two of them barely knew each other. Fake Problems and BTMI had toured together once, half a decade earlier. Every few months they’d play a show together, and hang for a few hours. But was that a close friendship? Up at the top of the stairs, listening to Chris come up the narrow stairway, Jeff was having similar thoughts. What if the collaboration was a disaster?

Something clicked that first day. Though neither musician had written collaboratively before, they planned another session a few months later. During that time, they made Antarctigo Vespucci’s first EP, Soulmate Stuff (an album whose name should put to bed any lingering fears). Written and recorded over a few days in a 3x6’ shoebox, 2014’s Soulmate Stuff was a natural combination of the Springsteen-like excess of Bomb the Music Industry! and the bubblegum melodicism Chris had cultivated in Fake Problems. Six months later, Antarctigo Vespucci self-released their second EP, I’m So Tethered. A year after that, their first LP, 2015’s Leavin’ La Vida Loca.

Shortly after Chris came to New York knowing his band was ending, Bomb the Music Industry! played their final shows. Like Chris, Jeff had spent the better part of a decade on the group, and had arrived at the end of an era. Throughout 2015-2017 both musicians launched successful solo careers: Chris’s defined by “pure power-pop goodness” (AV Club), and Jeff’s leading to Pitchfork calling him “one of punk rock’s greatest, most effusive living songwriters.”

Which brings us to today. After three (let’s say “eventful”) years, Antarctigo Vespucci have returned from the 3x6’ closet with Love in the Time of E-Mail, their first album for Polyvinyl. While by this point there is something of an established Antarctigo sound, Love in the Time of E-Mail finds the group expanding their sonic palette in exciting ways, reaching out further to unabashedly embrace all their poppiest instincts.

“I wanted to see you, to see if I still wanted to see you,” Farren sings, quoting Jean-Paul Belmondo on the insanely catchy “Breathless on DVD.” The mid-album track might get its bridge lyrics from Godard, but with its shimmering synth pads and Tom Tom Club-esque chorus, its lineage is equally New Wave pop as it is French New Wave cinema. On single “White Noise,” the tightly wound verse leads seamlessly into a chorus of “Can’t get you out of my head, I’ll listen to white noise instead,” a chorus that, between playful blasts of speaker fuzz, will stick with you for days. Elements like these are littered throughout Love in the Time of E-Mail, some flying by so quickly you might miss them on the first pass. And while the raw material for songs like “Another Good Thing,” “So Vivid!,”or the restless “Freakin’ U Out” could have easily fit on a solo record by either musician, the studious pop flourishes here bring them to new heights.

It may have all started on a whim in a cramped apartment, but like the friendship at its core, Antarctigo Vespucci has blossomed into something much more. And like the non-existent explorer they’re named after, Antarctigo Vespucci chart a map of something at once new and familiar: missed connections, texts lingering on “read,” and the words that go unspoken. Maybe it’s just a passing feeling. Or maybe it’s…Love in the Time of E-Mail!

Bandcamp Daily  your guide to the world of Bandcamp